Today, the tool market offers a wide selection of various welding machines and torches. Thanks to this, when preparing for work, you can choose a tool specially tailored to the needs and requirements of the material. Depending on the welding methods used for work, the appropriate type of burner should be selected. The wrong choice in this case may not only reduce the work efficiency and unnecessarily damage the material, but also pose a threat to the people performing the work. That is why it is so important to choose the right tool.

Two common types of torches used in welding work are oxygen-acetylene and plasma torches. They differ significantly both in terms of their function and the possible material they can process. It is worth knowing the differences between these two methods to know in which cases they can be used in order to obtain the greatest possible work efficiency.

Gas welding with an oxy-acetylene torch

Gas combustion involves heating the material to the ignition temperature with a welder. The molten metal oxides are then forced out through a very high-pressure gas line.

Gas welding machines work by heating technical gas and mixing it in the right proportions with air. Acetylene is often used as the fuel gas. When properly heated, it is able to melt metal, mixed with oxygen in the welding machine, it allows it to quickly reach high temperature. Therefore, it is an ideal welding method where you need to work on a sufficiently thick material and you need a very powerful torch. It is perfect for work on low-carbon and low-alloy metals.

However, the power of such a burner also limits its use. The acetylene torch is perfect where you need to work on thick materials or those that cover a wider surface. Due to the very large heat area generated by oxy-acetylene torches, they are not able to cut sheet metal thinner than 3 mm.

Welding with a plasma torch 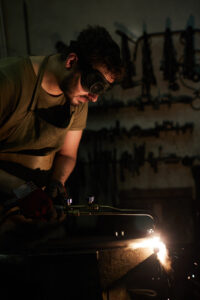 Plasma torches use the so-called The fourth state of aggregation - plasma. It is electrified matter that is concentrated like gas. The torches use the properties of plasma related to the transfer of current. It is a very good conductor of current, while the resistance in the case of plasma decreases with increasing temperature. As the temperature in the welder rises, the plasma slowly heats up and glows until it exceeds a certain limit, resulting in an electric arc used for cutting and welding the material.

As with the oxy-acetylene burner, here it also works by burning metal oxides and throwing them out of the material. In this case, however, it is not done with oxygen, but with an electric arc with a very high kinetic force.

Welding with plasma torches is a very popular method. No wonder, it has many advantages, so you should consider using a plasma torch for work where it is possible. The plasma welder ensures high quality of the weld as well as efficient and fast work, many times faster than other types of torches. Unfortunately, due to their operation, plasma torches cannot be used everywhere. They cause a lot of noise and intense radiation, so they are not suitable for work in all conditions.