What is welding and what does it consist of?

Welding in the simplest terms is joining materials by heating them and melting them at the point of joining with or without adding a binder. The high temperatures necessary for bonding usually come from the welding arc or gas welding. Welding is, contrary to appearances, a broad field that is distinguished by techniques such as: 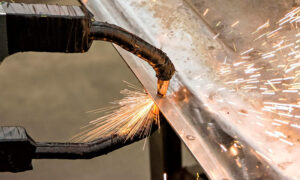 Friction welding is a method that joins materials together through the energy generated by friction. The permanent joining comes from the direct conversion of mechanical energy into thermal energy as a result of friction in the area of mutual contact between the objects to be welded. The contact area of the workpieces being welded heats up from the outside, so that impurities are removed. Later, the heat penetrates to the inside, where it spreads, and a weld is formed at the very end.This method allows components made of materials such as:

Soldering is a reliable and highly popularised way of joining two metal parts together. It is not a difficult task; with an easy-to-use device and basic knowledge, this method can be used. It is the process of joining metal parts by soldering. Unlike welding, which is a popular metalworking technique, soldering does not damage the structure of the parts to be joined by means of solder. For the soldering process to be successful, there must be a suitable temperature that does not create the risk of over-melting, but still for the bodies to join.

There are two types of soldering:

« Low-speed lift
Construction of a forklift »